We were going to be cruising out of Port Canaveral for our friends 50th birthday cruise, so being so close to Walt Disney World, we decided to fly out 2 days prior so that we could enjoy ONE full day at the parks.  This is a hard thing to do because Disney World is HUGE!   So we decided to plan ahead to just catch the very newest of attractions.  We tried to secure as many FASTPASSES as possible prior to our arrival, however, the Travel Agent works on her trips last and was not quite on top of the "first chance" date to get our own Fast Passes set up!

Anyway, I back up.  We landed Orlando airport in the evening, once we retrieved out luggage we followed the 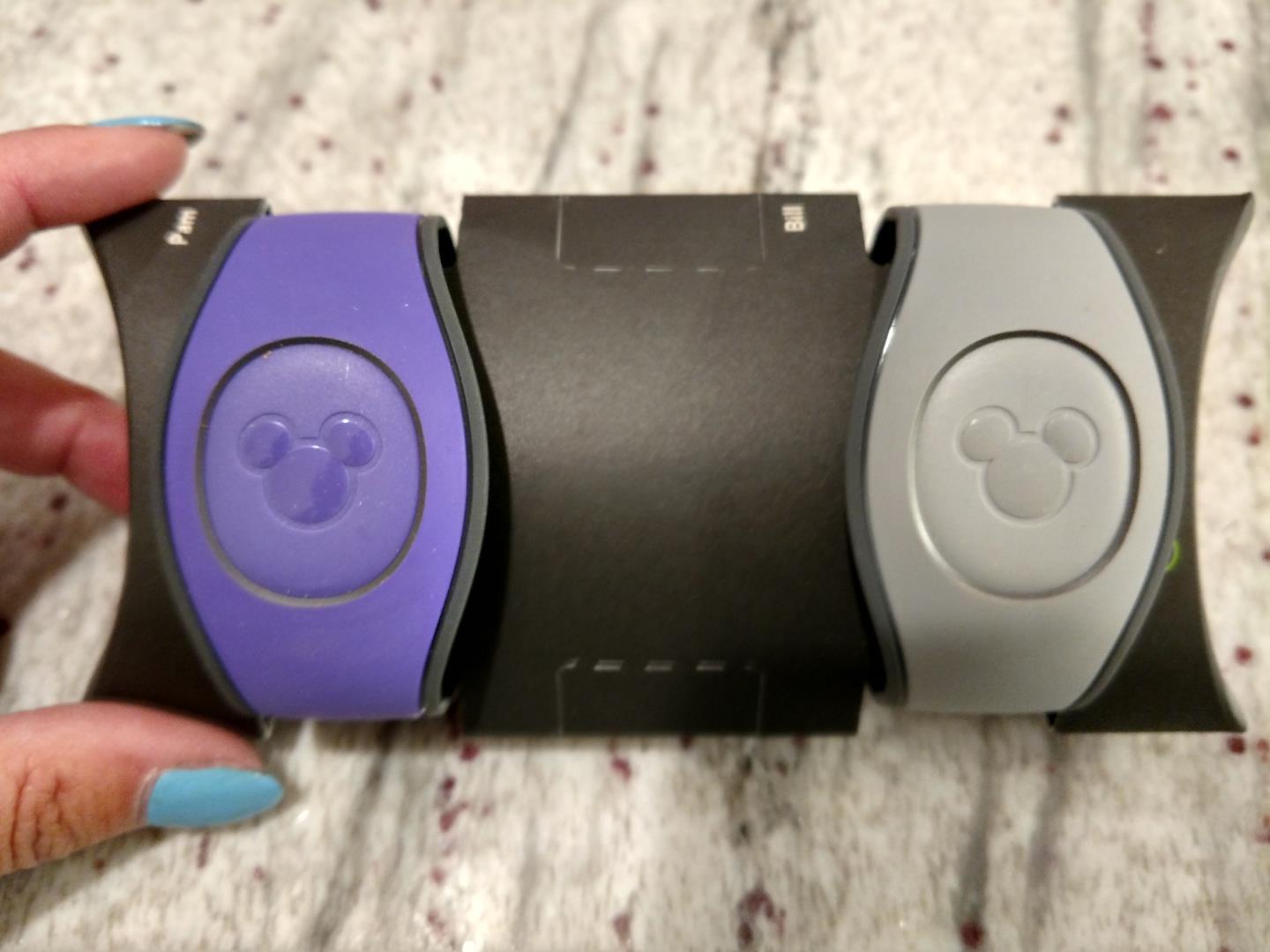 signs to Disney's Magical Express.  This was a very smooth process, because we had our MAGIC BANDS.  The Magic Bands are amazing and are pretty much your key to an easy & carefree experience around Walt Disney World.  These bands will get you into your room, pay for purchases, get you into the parks..it's just an awesome concept.  I will admit that I was hesitant because I don't like to wear anything that clashes with my fashion and jewelry, but once I purchased a bottle of water with a quick scan, I was sold!

We chose to spend our one and only day in two parks to see the key attractions that were new to us!  We started the day at Disney's Hollywood Studios since  we had the early magic hours.  Unfortunately, we were 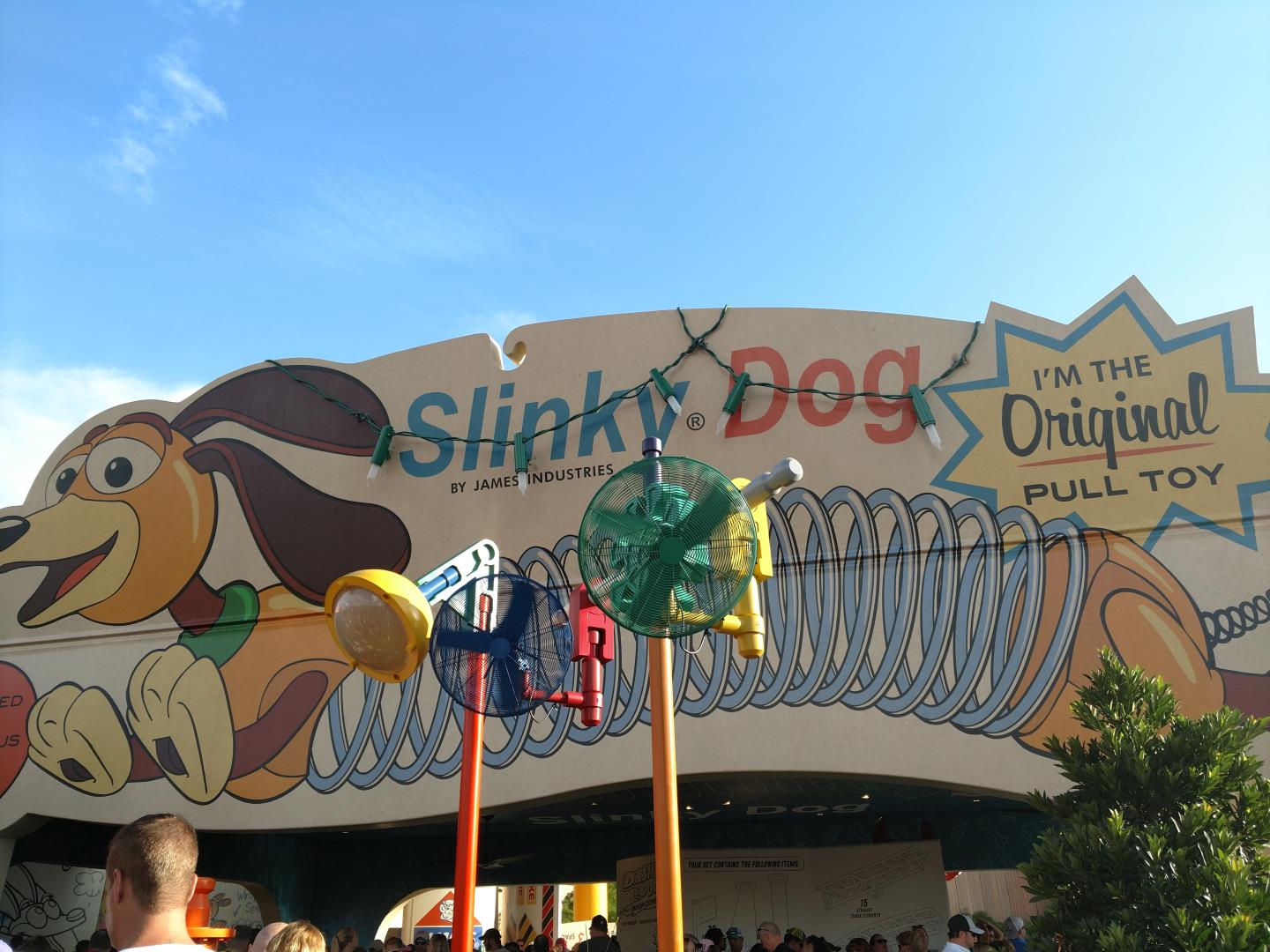 tired and didn't get that quick start that we had hoped to make and we missed the bus, so we had to wait about 15 minutes for the next bus.  We did get there before rope drop and made it to Toy Story Land before the general public.  However, we still had to wait about 30 minutes for Slinky Dog Dash.  I might have stopped for a photo or two or three on the way to the ride!  It was a pretty fun 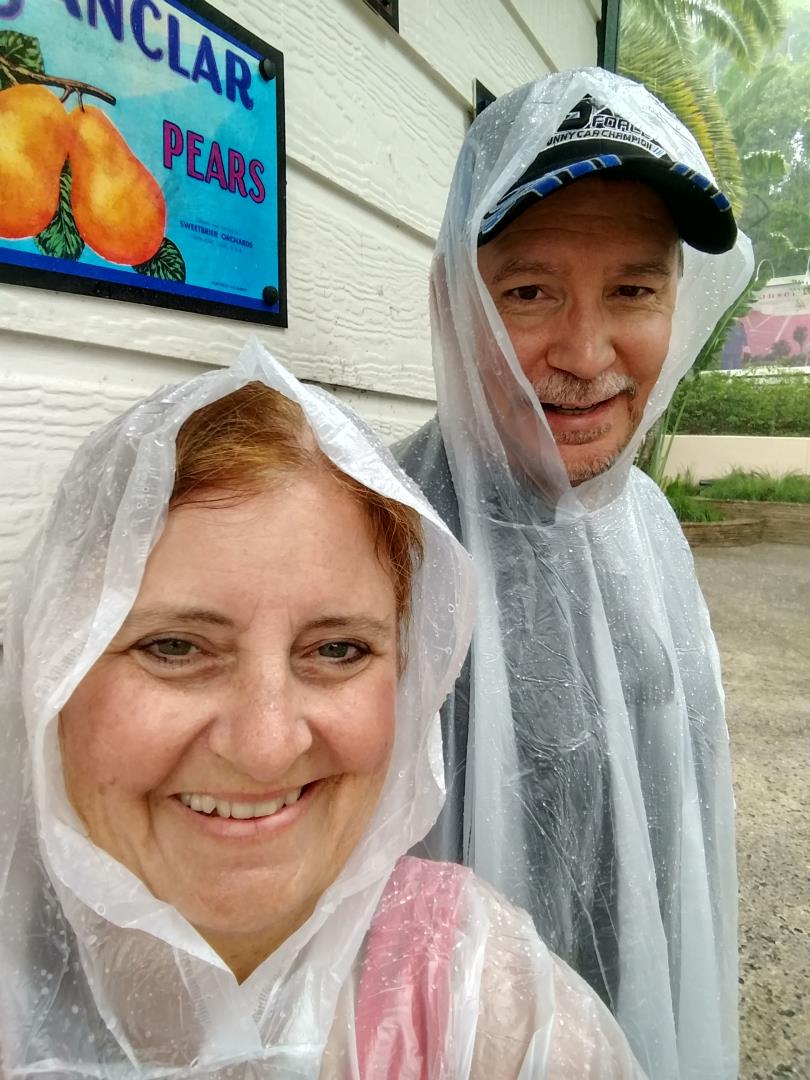 ride and we enjoyed it.  I don't think I'd ride it over and over again though!  Afterwards, we checked out the new Alien Swirling Saucers, very much like a tea cup ride.  Then it was a visit to a favorite ride- Toy Story Mania!   From there, we had a little time left so we headed over to Aerosmith's Rock'N Roller Coaster , which is a favorite and it did not disappoint.   However, once we got out of the ride a typical August Florida Thunderstorm was underway.  We took cover in the gift shop for awhile and then finally decided to buy the dreaded ponchos and try to make a run for it...we didn't get very far before it REALLY came down, pouring rain..it was crazy!   It was definitely something to laugh about.  We just do not get that kind of spontaneous rain in California!   Eventually, we knew we had to get moving as we had lunch reservations with friends that we needed to get to.  So we braved the crazy weather and headed straight to the gift store to purchase two umbrellas, a backpack and a pair of socks (mine were drenched).   We were definitely prepared for any additional rain the rest of the day and as Murphy's Law would have it, never another drop!

We had a lovely Character Lunch at Hollywood & Vine with Minnie & Friends.  The 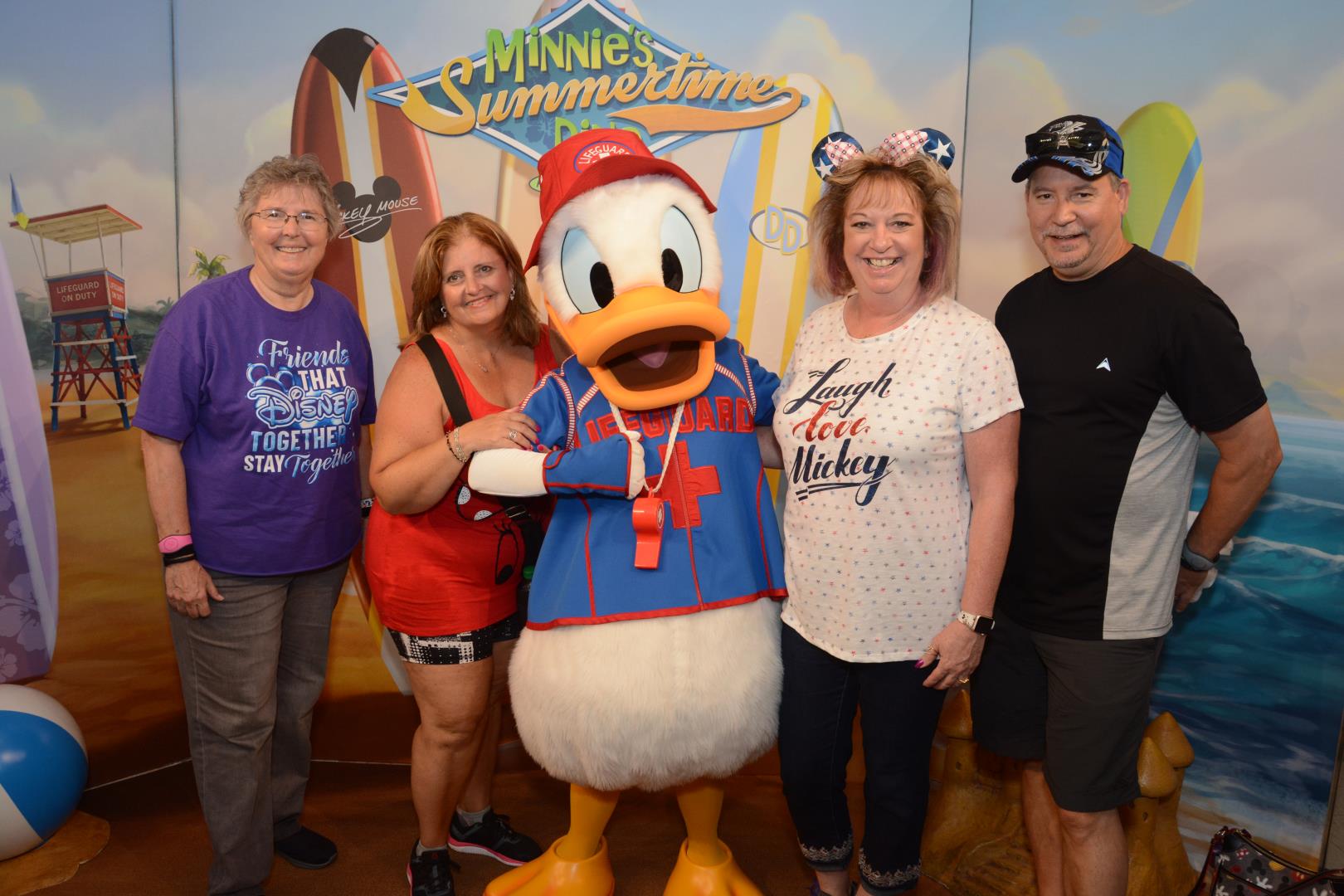 buffet was really good and the service was also very good.  We had a friend with food allergies, so that is always the test of service to see how they handle this & Disney handles it with flying colors!   Seeing all of the characters is also part of the experience and we love our Characters!

After lunch we bid farewell to Disney's Hollywood Studios and headed over to Disney's Animal Kingdom.

We had very ambitious plans for the day. Once we got to the park, we took a few pictures and then headed over to the Na'vi River Journey.  We had fast passes for this attraction and it was a good ride, nothing over the top amazing, but good.  We then had a little time to kill before our next Fast Pass & the wait for Avatar Flight of Passage was really not that long, so we decided to jump in line.  We ended up waiting about 45 minutes for this attraction which is a very short wait time!  It was AMAZING!  Probably the best ride that we've ever ridden and up until now, we thought that Harry Potter's ride was the best...not anymore.    We were so happy that we got to experience this ride and it's well worth doing 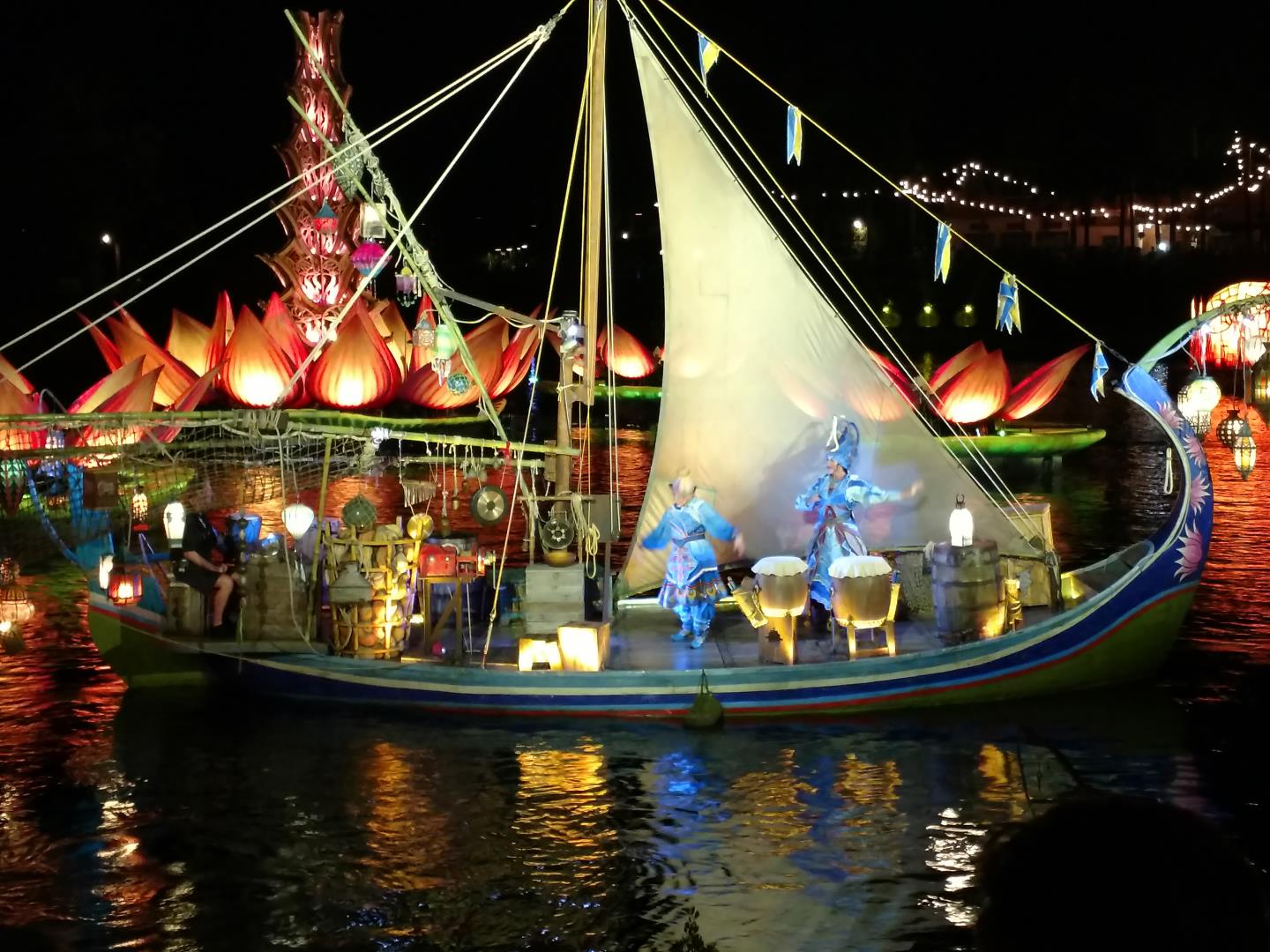 whatever you can to get the fast pass in place!   When we got off that ride, we were very close to missing our window for our fast pass for the Dinosaur Ride, but they do give you some leeway- we rode that ride and it was also very good.  It was then dinner time!  We met up with our friends for the Rivers of Light dinner package at Tiffins Restaurant.   We had a great dinner and then proceeded to our special seating area for the Rivers of Light show.   It was a nice show, definitely one and done. We were bummed that we missed our fast pass for Expedition Everest!  We have ridden it before and know that it's awesome, we had just hoped to sneak it in on this trip.

Overall, we did a great job of seeing two parks in one day...by the time we were done- we were DONE!   TIP:  we finished the show when the park was closing, everyone was leaving at the same time.  Everyone is headed to the hotel shuttles which had long lines.  We ordered an Uber to pick us up and we were back at the hotel in about 20 minutes.  It would have taken over an hour to get back to the hotel if we waited for the bus!   Plus we made a friend and our Uber driver came back the next morning to take us to the Port Canaveral Cruise Terminal!

Where did we Stay?

Well we booked our room at Disney's Coronado Springs resort.  It's huge and our room was quite a distance away from the registration/check-in desk.   But it was only for one night.   I did not take photos of our room (what is wrong with me), but probably because it was late at night by the time we got to our room, we just wanted to unpack a little bit and get to bed for our early morning!  My first impression of the resort is that it is beautiful, it is large.  The rooms are consistent with other Disney resorts that we've stayed at in Florida, sort of cookie cutter.  They were doing some renovations and constructing a new tower, so it's just getting bigger!

We had a good time for our one day lightening speed visit to Walt Disney World- here are a few more photoes!