We decided to take this 3 day coastal when our friends Suzy & Charles decided to renew their wedding vows on board.  It was their 7th Anniversary and they had gotten married on a Coastal Cruise – 7 years after dating.  So 7 is their magic number!

I was able to convince my mother to join us and also two girlfriends who were in need of a short getaway.  Suzy also had several friends to join them for the renewal, so once again we were traveling with a group and a very nice group of people I might add.

We had an early morning flight out of SFO flying nonstop to Vancouver, everything was on time, we actually landed a few minutes early and the flight was smooth.   Navigating through the Vancouver airport takes some time, it seems to always be a long walk to get to the Customs and Baggage Area.

We were lucky though, absolutely no lines through customs, we breezed right through and then took our time walking to the taxis with mom in tow.  I guess the wheelchair guys can only go so far and it ended up being quite a walk after baggage claim, which I wish we had known so we could have made alternative arrangements.

Taxis were easy to get and the 5 of us piled into the mini-van variety to the Cruise Ship Terminal- this was about a $60 taxi ride, but divided amongst us all, it wasn’t bad at all.   We boarded the ship and started to tour!

The check-in process was very smooth and quick- we did have a wheelchair assistant for my mom, so we did zip by many people because of that.  Once on board because our cabins were not ready we decided to have lunch in the main dining room.   When  lunch was over, we were able to bring our things to our cabins and then explore the ship.    It took us a bit longer to explore because mom doesn’t walk too quickly, but it was fine.

The ship is laid out pretty logically and the décor is nice.  It had been many years since I last sailed on Holland America and they always had the reputation of catering to an older crowd.  They have said over and over again that this has changed; however, it didn’t seem to have changed much on this cruise.  I do know that Alaska is an older destination and this ship had just finished the Alaska Season, so maybe this was not the correct cruise to get that information confirmed or denied.

This was a short cruise, so I won’t go into every detail.  Overall, the service I thought was good, but I found that many of the service people were sneaky in trying to sucker you into buying a double drink or adding a special shot and I think they prey on the elderly.  My mother wondered why one of her Baileys coffees was $20 and the other was $9- well it had to do with a double shot that they asked her if she wanted and between her hearing not being so great in a loud environment and the language barrier- she nodded.   So that is not cool.   When we would go to the disco to dance- the waiters were always very quick to bring the drinks we were buying, but if we asked for a glass of ice water, it took forever and sometimes you had to ask multiple times to get it.  Not cool.

Our few nights of dancing were good, they played good tunes and we had plenty of space to dance in the disco and the floor was suitable.   The other entertainment was very good as well.  We were a bit annoyed by some of the other passengers, many seemed to have the “entitlement” type of attitude.

We did have some pretty rocky seas one of the days and many people were feeling seasick.  Fortunately. My mom, husband and I were fine, but one of my friends didn’t do so well.

THE HIGHLIGHT OF THE TRIP:

We took a behind the scenes tour of the ship- this was a $250 per person cost experience, but worth every penny.  My husband and I did this, it was about 3 hours and you got to go behind the scenes in just about all aspects of the ship.  We started by going back stage and saw the dressing rooms, the costume “closet”, make-up rooms, props, etc.   We got to tour the Galley and  also all the food storage areas.  We did get to tour the Bridge and the Engine Control Room; however, the Engine Room was off limits.  It was a fascinating tour and we enjoyed it thoroughly.  Included in that cost, when the beverage locker was opened for us to see, we were greeted by waiters with trays of champagne in hand.  When greeted by the pastry chef, we had some sweet eat samples to choose from and at the end of the tour we were given a cocktail in one of the venues and the opportunity to ask any additional questions and then sent on our way with a goodie bag that included some shot glasses, a cook book, menus signed by the Head Chef and a copy of our group photo with Captain Turner taken on the Bridge.  So it really was a great value and an experience that we won’t ever forget. 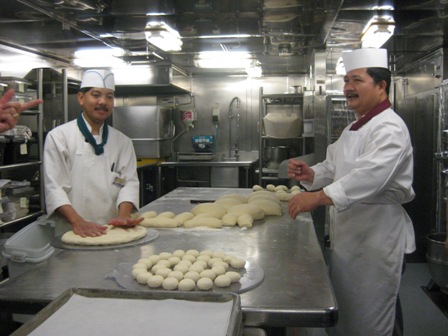 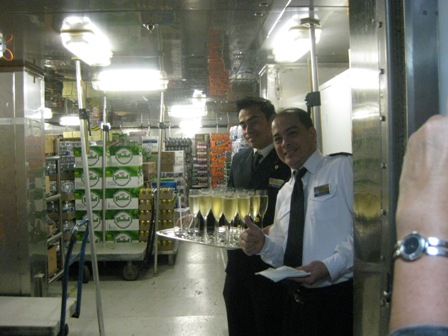 Picture with Captain Turner-- he was really a great guy! 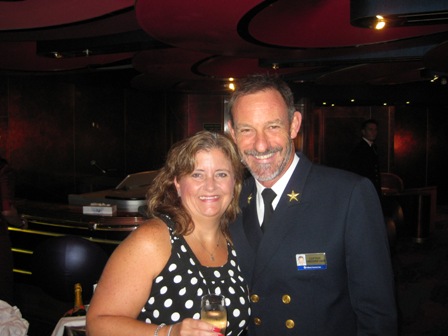 My favorite quote from the cruise:  "There are big ships, small ships and ships that sail the sea,

but the best ships are relationships, may they always be."   LOVE it!

This was a short trip as I mentioned and we were with a group.  Two of the three nights we were in the Main Dining Room and enjoyed the company of our group and the meals were good.   Service was fine- so really no complaints.   We did dine the last evening in the Pinnacle Grill, which was the post-vow renewal dinner and there were some service issues; which of all places, should not occur in the Specialty, “pay extra” restaurant.  We had one lady in our group with a food allergy and even though they were advised multiple times, they still brought out food to her that was unacceptable.   Fortunately, she caught their errors and did not eat anything that would have caused her sickness.   Other than that, the food was excellent and service was good.

For a short cruise like this for a quick getaway, I would cruise Holland America again, but I would not specifically seek out a Holland America Cruise for our own travels.   It just wasn’t our favorite, but I do have plenty of clients who have sailed with Holland and who continue to sail with Holland America.  It just goes to the adage that “different strokes for different folks”- not every cruise line or every cruise ship is for every cruise passenger.  We all have our likes and dislikes and it’s wonderful that there are so many cruises  ships from which to choose in the cruise industry!

To see more pictures of this cruise, with lots of behind the scenes pictures click here:

Below:  I woke up early enough (by accident) to see us sail under the Golden Gate Bridge on disembarkation day!  What a great sight in the chilly morning air!   Then back to bed to awaken at a real hour and we had a crystal clear day upon arrival in San Francisco- picture of Coit Tower almost looks fake! 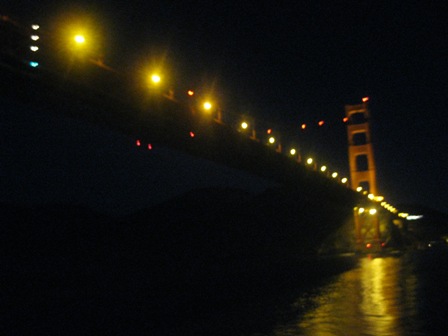 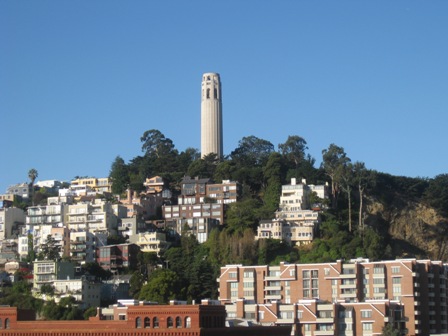