My annual Vacation.com conference was held in Orlando, Florida this year at the Disney Dolphin Hotel.  I stayed an extra two days after the conference to do a little park hopping while I was there and check out a few things that have changed since my last visit in 2010.

We stayed at the Disney Dolphin Hotel, which is a Starwood Property and conveniently located on Disney World property.  The Disney Dolphin & Swan are the only non-Disney owned properties on site and they get to take full advantage of the Disney World Transportation System between all resorts and parks.  The hotel itself is large and they house a lot of conferences, but as is the case with most conferences in Walt Disney World, conference goers extend their trip and bring the family to enjoy the parks.  I failed to take pictures of our hotel room, a colleague (Mandi from Pams Path to Travel) arrived a few days before me, so the room was already "used" when I arrived and would have been hard to take fresh pictures without personal belongings in the pictures.  The hotel has been around for decades, but the rooms are nice and clean, the bathroom was on the small side, but we managed.  It would be hard for two people to get ready at the same time by the mirrored area.  But the toilet and shower were in a separate room, so one could be using that area while the other is using the sink and mirror.   Overall, the hotel was fine, we dined at several of the restaurants and all were good.  We even walked over to the Swan one night for dinner at Il Mulino and that was delicious Italian food.

Our first three days were all conference and the meals were provided by the conference at the hotel.  Again, all very good meal selections and the food was very good- a nice reflection on the Dolphin Resort.  We had a few fun activities planned for us in the evenings- one of which included a night at Sea World.  We were taken there to a park that was closed off specifically for our group.  They had 4 rides open for us to enjoy, including the new Antarctica Experience.  I thought the ride left a bit to be desired, but the end result was an up close experience with Penguins and they are awfully cute.  The "land" is done up nicely and is very ice like, which always seems weird in such a hot weathered place like Florida.  It was a cool experience and we even met some of the resident Penguins that get to mingle with guests.  Our evening ended with a private show featuring the guest of honor- Shamu! 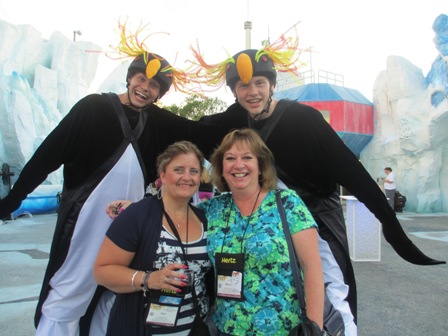 After the conference was over, Mandi & I spent two days at the parks.  Our first day we went to Disney's Hollywood Studios.  We took the very convenient water launch from our hotel directly to the park and arrived in approximately 7 minutes.  Here we are waiting for the water launch. 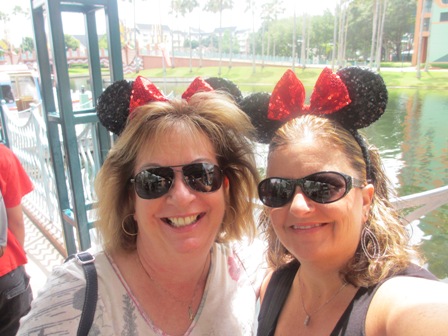 Once we arrived at the park, I was thrilled to see the huge Monsters University display outside the front gates.  All done with topiary trees- it was pretty incredible and just gets you more excited for the movie.  I will say  now as I write this- a week after returning, that the movie just came out this weekend and I loved it!

Overall, not much has changed at the Disney's Hollywood Studios since my last visit in 2010.  We went on several favorite rides, but we also took part in a few things that I never had the chance to do before.  Of highlight we participated in the Animation Studios Drawing experience- a lot of fun, we gave it our best shot at drawing Tigger with the step by step instructions.  We also took time out to wait in lines to get a few character photos with Buzz, Woody & Fantasia Mickey!  It was a fun-filled, long day!

Our second day we spent at Disney's Magic Kingdom.  I still believe that Cinderella's Castle is so much prettier than Sleeping Beauty's Castle.  Of course the Castle leads you to Fantasyland and this Fantasyland has gone through a major renovation since 2010.  Given that I don't travel to the Magic Kingdom that often, I knew things had changed, but it was hard for me to really feel the change in the layout until I spoke to a cast member and she explained how some existing attractions had been moved completely.  A few notable changes:  there is now a new area "The Enchanted Forest" set up as  Belle's Village from Beauty and the Beast with one attraction and a dining experience.  We stood in line for the attraction "Enchanted Tales with Belle", which was an inter-active version of story telling and it was quite nice and for any little girls wanting to meet Belle up close and personal- this is the place to do it.  I recommend that kids be sure to volunteer to be part of the story as they will get some extra special attention from Belle. 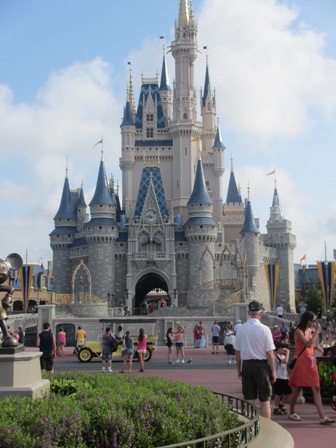 The "Be our Guest" restaurant is set up in the middle of the Beast's castle.  We didn't have time to dine here, but I'm sure given all the new innovations it would have been wonderful.  We did pick up breakfast though in the village at Gaston's Tavern and had a humongous Cinnamon Roll that was delicious!  Additionally, the Enchanted Forest includes "Under the Sea- Journey of the Little Mermaid" which is just like the one we have at California Adventure and then "Ariel's Grotto"- a place to take pictures and autographs.

With the on-going changes in Fantasyland, they sectioned an area "Storybook Circus" and moved Dumbo and doubled the fun. There are now side by side, Dumbo attractions with a tented playground in between them.  They have The Barnstormer which is a mini-coaster ride, Casey Jr Splash N Soak Station (to get wet) and then Pete's Silly Sideshow where you can meet some characters inside the big-top tent.  Coming next year will be a new Snow White & Seven Dwarfs attraction that looks to be pretty cool.  It will be a small roller coaster type of ride called "Seven Dwarfs Mine Train". 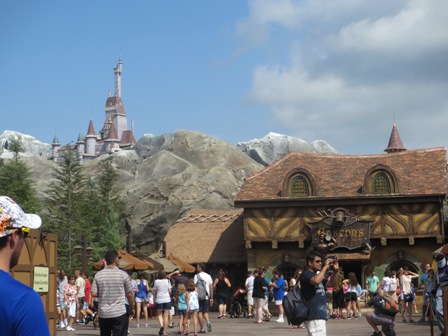 Overall, our day at the Magic Kingdom was productive- we enjoyed seeing the changes and riding some of the rides.  Early morning was very nice with very few lines, as it got later into the morning, early afternoon some lines were getting long, but it was a pretty low crowd Sunday.