We sailed on the Coral Princess for 4 days on a Coastal Cruise from Vancouver Canada to Los Angeles.   Our friends were doing a vow renewal for their 14th wedding anniversary,   These friends were married on a coastal cruise after 7 years of dating so they decided to renew their vows on a coastal cruise every 7 years.  It’s really a sweet thing to do & a fun reason to get a group of people together for a fun time!

We flew up to Vancouver the day prior because you never know what could happen with delays & getting through Immigration/Customs in Vancouver Airport, though much better than it was 7 years ago, can still take some time.  All in all, it took us a little over an hour from landing to getting into our limo ride.  When you walk through the Vancouver airport, you are instantly reminded of the Pacific Northwest Culture. 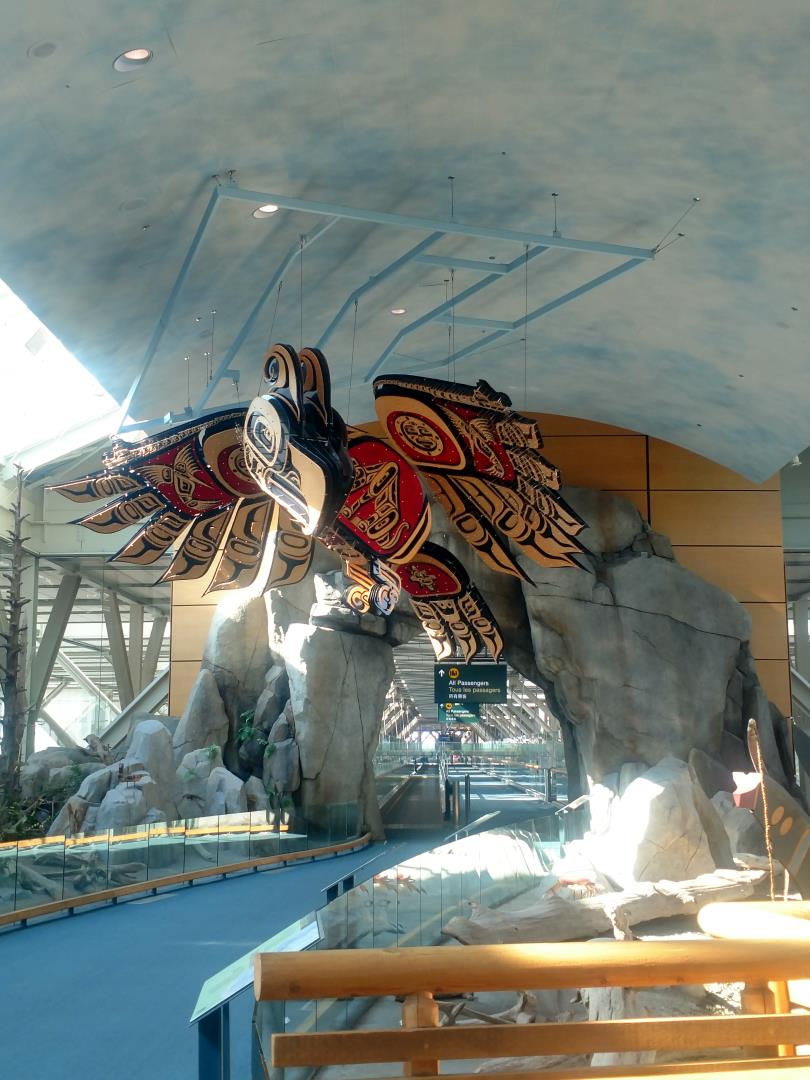 I had pre-booked a private car/driver for the 4 of us who were on the same flight and our driver was ready & waiting for us when we exited the baggage claim area.  Super friendly driver, engaged in interesting conversation and added his own tour guiding of Vancouver along the way.   He offered some suggestions for things to do and restaurants that we might like to visit.  Made for an enjoyable 30 minute drive into Vancouver.

We stayed at the Sheraton Wall Centre which was very centrally located in downtown Vancouver.  A huge hotel with two towers that go up to 26+ floors - we were on the 26th floor and I think there were 2-3 more floors to the top.  We had a beautiful view from our room and the room itself was very comfortable.  Staff was very friendly and welcoming.  We did visit the lobby bar for a nightcap & our bartender had lived in the Bay Area for a few years, so it was nice chatting with someone who knew our home.  We also visited the Starbucks located in the hotel lobby and it was huge!!  Guess the larger the hotel, the larger the starbucks!   The hotel does have a full fitness facility and a swimming pool, though we did not use either.

We spent our afternoon walking to the waterfront and hopping the ferry to Granville Island.  Seriously, you could probably swim there it’s that close, but these ferries run all day long and the fare was $6 round-trip.  Since the US Dollar and Canadian Dollar are almost at par, they take US dollars but don’t give change or do an exchange rate conversion.  We walked around a bit & found a lovely spot to enjoy lunch.  Afterwards, we walked through the markets and checked out the various arts & crafts that were for sale.  Then we hopped the ferry back to Vancouver.  We had a bit of time to get ready and freshened up for dinner. 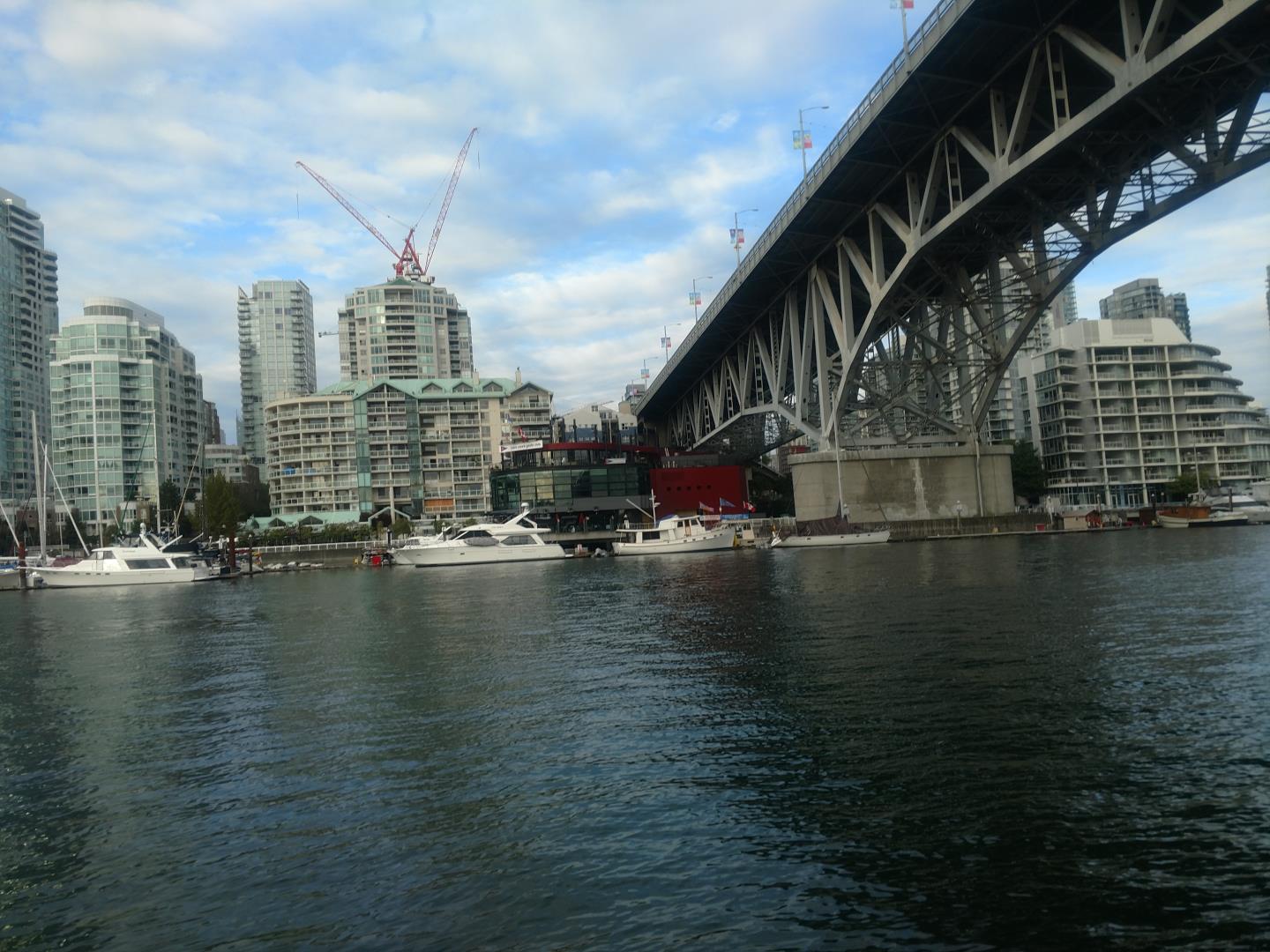 I had pre-booked a reservation at the Top of Vancouver Revolving Restaurant.  Our hotel offers a complimentary shuttle to Canada Place Cruise Terminal and the Convention Center, but the driver dropped us off where we needed to go as it was right on the way.  We had a wonderful dinner with fabulous views and they didn’t rush us out of there, it was a very enjoyable meal.  Though truth be told, we were all so full still from lunch, it was actually painful to eat dinner! 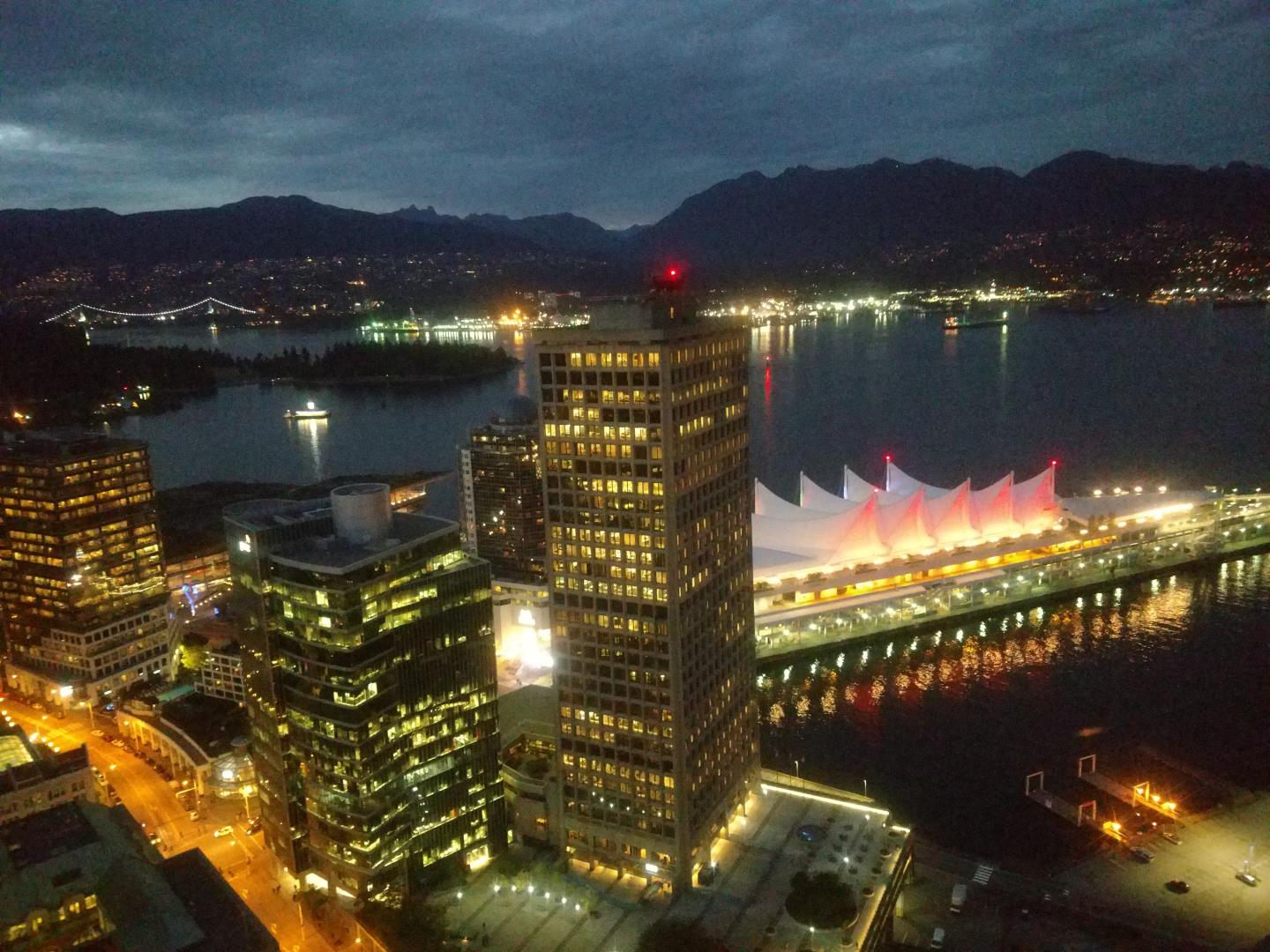 The next morning we got up and took the hotel shuttle to the cruise terminal.  Things were a bit hectic once we were dropped off & the grounds crew seemed to be a bit confused & therefore did not offer helpful information when we arrived.  One downside to having the hotel shuttle, they are not allowed to drive into the garage and that is the most convenient drop off point right next to the luggage drop.   So we had to walk with our bags down a ramp, into the garage to drop of our bags.  Then we had to check in with the cruise line,  after that we had to clear customs and immigration since we were leaving Canada & then about 90 minutes from start to finish, we were on board the Coral Princess.  At least our rooms were ready and our luggage arrived to our cabin right away as well, so we were unpacked and ready to explore pretty quickly.  Our cabin steward greeted us with a glass of champagne and our friends had the cabin next door to us, so we enjoyed our toast of champagne togther!    We stayed in a mini-suite, which was nice to experience the larger cabin.  About 6 weeks prior to the cruise, we received an invitation from Princess to upgrade to the mini-suite for $79 total for the 4 day cruise, definitely an offer that we could not refuse.  We had Dolphin 523.   When the agent at Princess gave me cabin options, I didn’t even have to look at the deck plan, once she said 523, I knew that was my cabin as it’s my mom’s birthday!

Super special for me. 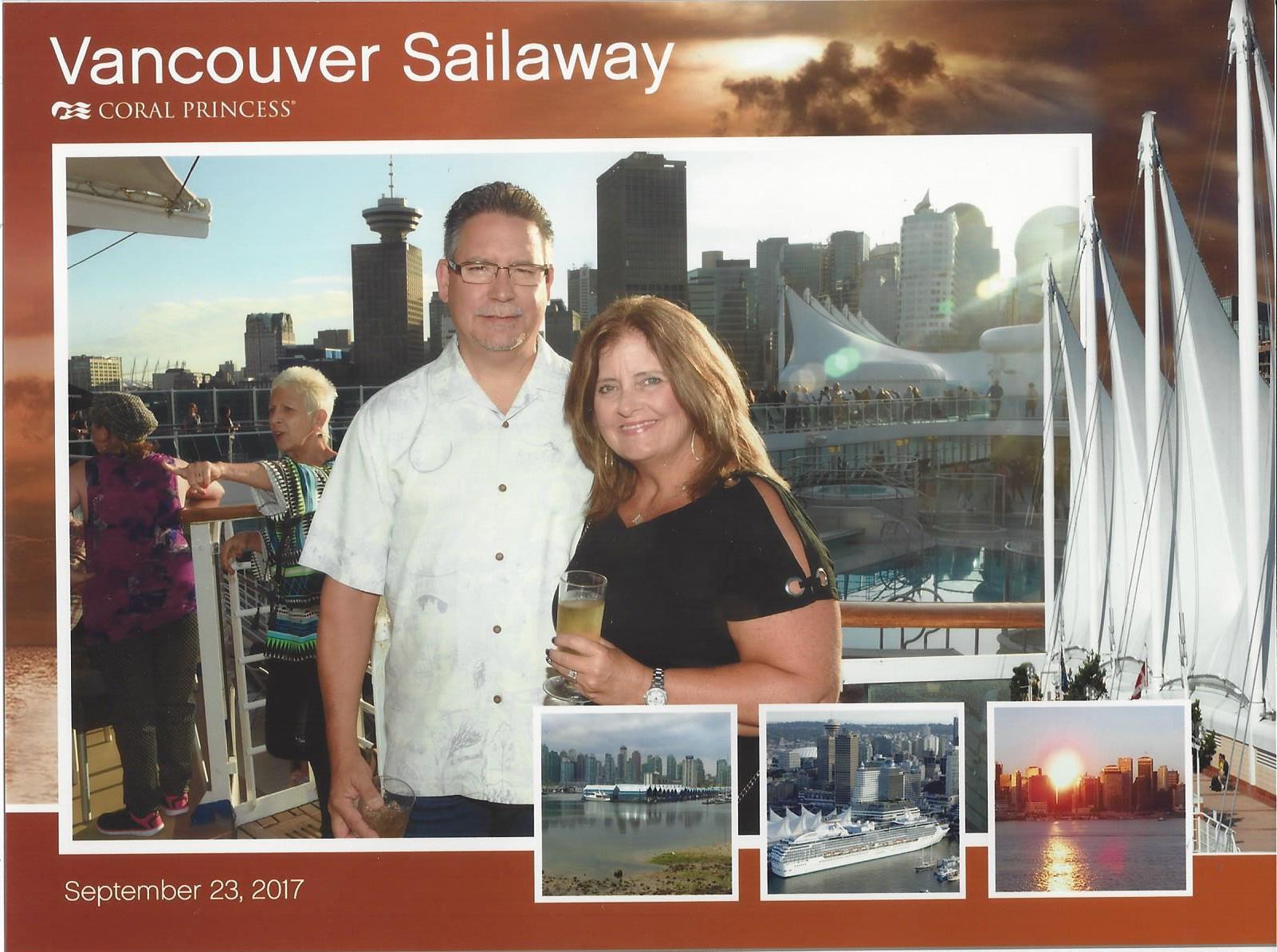 Our mini-suite was huge- large sofa that could pull out to a bed but made for a nice sitting area.  Our beds were very comfortable, our bathroom had a full tub & our cabin steward kept things perfect for us during our cruise.

As you probably know from my previous Princess Cruises that I’m not a fan of Princess.  This cruise on the Coral Princess was my 6th Princess cruise and my 42nd lifetime cruise and I will say that I finally enjoyed a Princess cruise and don’t have any real complaints.  The service on the ship was outstanding.  We had no problem getting bar service in the main lounge, The Explorers Lounge, which is where we spent most nights.  We made friends with all of the servers because they all helped us at one time or another and they remembered our drinks & names.  One of the waiters (Hansel) made me this cute dollhouse chair out of a Prosecco Cork and the wire contraption that seals the bubbly.  Very thoughtful & I will remember that.   He says that he has a sister in India and her name is Gretle,  I’m not sure I believe him but he was fun to talk to every night!  We spent some time by the pool & had great service there also.  Our service in the main dining room was very good every night. 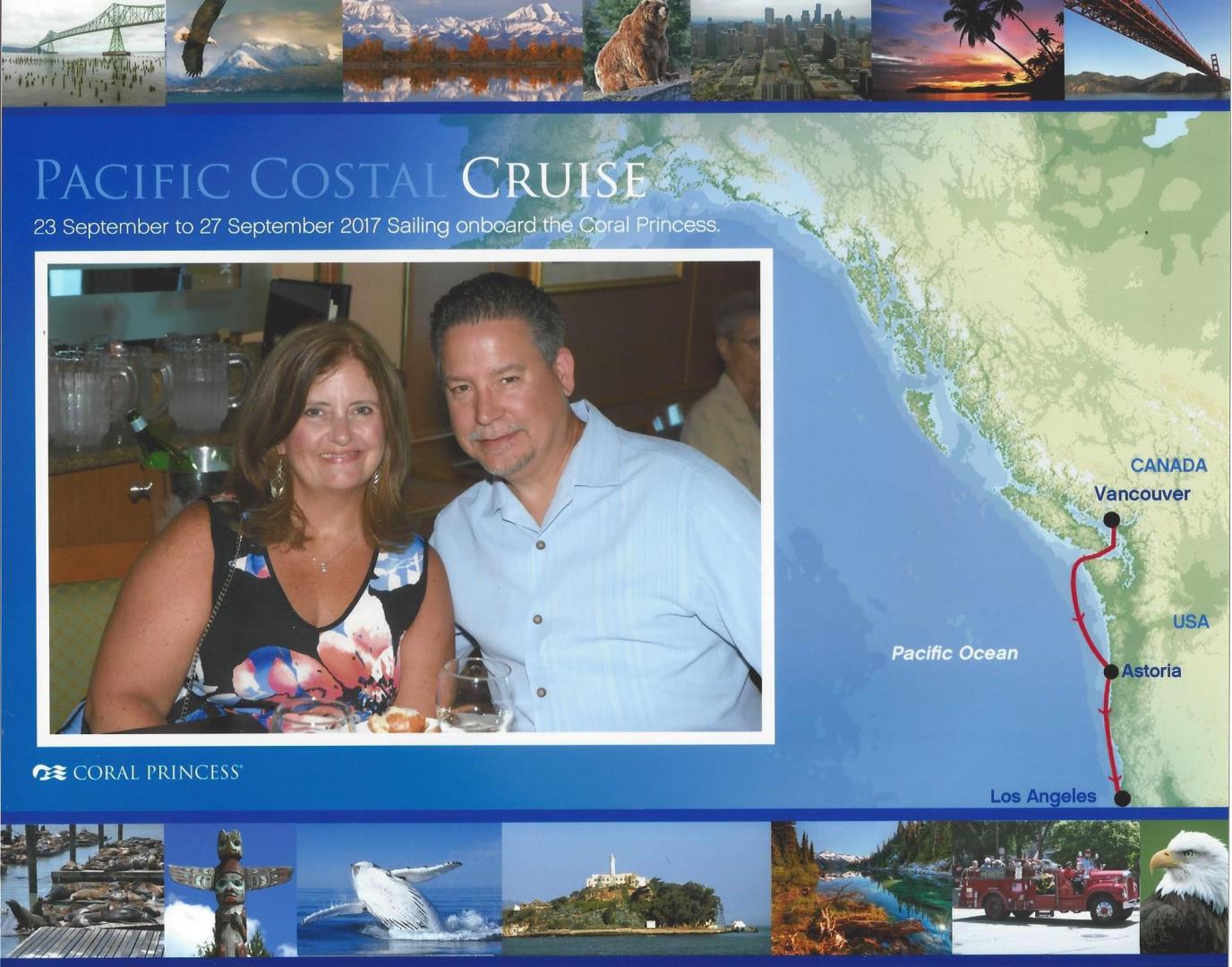 Food was good & the head waiter made a point to check in on our friend who has several food allergies.  He made sure she saw the menus each night and took her order so that her allergies could be accommodated.  We did not visit the specialty restaurants on this ship, though they do offer Sabatini’s Italian & a Steakhouse as well/combined with a Cajun New Orleans restaurant.  We visited the Horizon Court once for lunch and ate from the Grill and the Pizzeria twice for lunch.  Of course, we didn’t make breakfast because we sleep in!  Our friends did have breakfast and said it was fine, it’s kinda hard to mess up breakfast!!

Entertainment was fabulous on the ship.  Our primary interest is dance music.  The Coral Princess has a band “Rhapsody” from Barbados and they were fabulous!  Great vocals and “B Nice” aka Brian one of the lead singers was so entertaining with his dancing & fancy feet.  You could just tell how much he loves being on the stage & performing!  Claudia was the other singer and she could sing!!!  They performed a variety of music & honestly in 4 days, I don’t think they repeated a single song.   DJ Ben-jammin was very good & he played until the last person left the club each night.  He even asked us what we wanted to hear since we were the only ones dancing, at that point we were the only ones in the club & he could have easily just played music we didn’t like until we left.

The ship offered the typical audience participation game shows, we once again tried to get picked for the Marriage Match game, but did not.  The night this game was offered happened to be our friends anniversary & they did get picked. 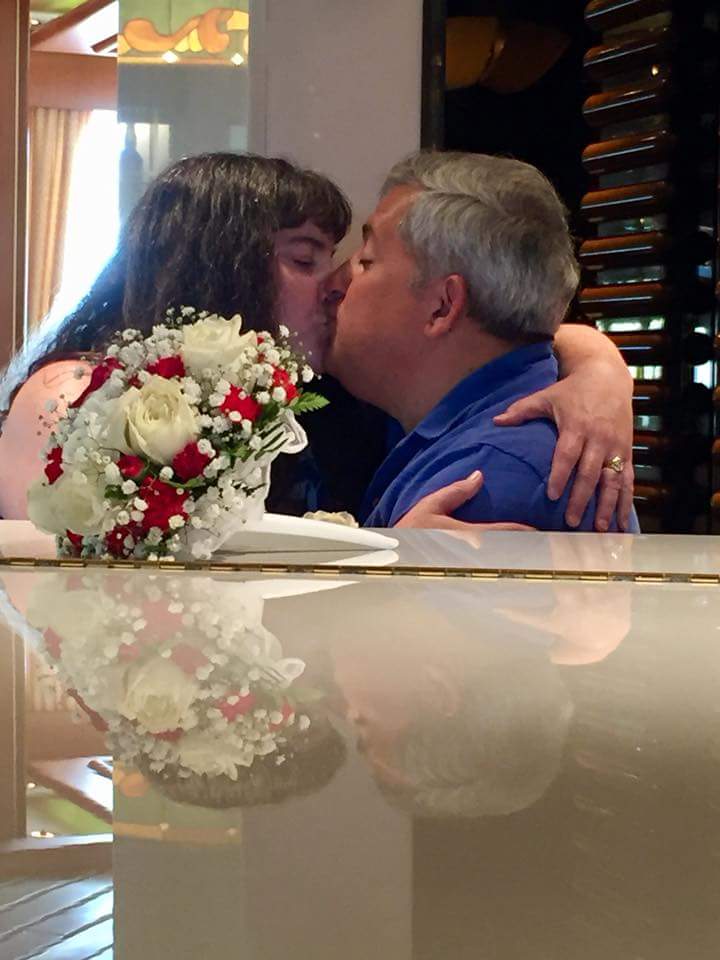 Another couple who were married that day on the ship were also picked...always a fun time!  They also had a comedian and another variety act another night, we just never made it outside of the Explorers lounge.  We were normally set with our music and audience partipation games.

During the days they offered all sorts of activities as most cruise ships do.  Golf putting, basketball, art auctions, bingo, Zumba classes, line dance CLASSES, spa wellness classes, trivia, name that tune.  Our team nailed the name that tune one day with a perfect 25/25 score...I was very proud of that!!

Our itinerary just allowed for one port stop in Astoria, Oregon.  We were not interested in any of the tours offered, so we slept in & hung out on the ship.  We had really nice weather throughout this cruise, so it was nice to just soak up the sunshine a bit.  We spent one of our sea days playing Mexican train with our friends overlooking the pool deck, while watching a movie on the big screen that they use for Movies under the Stars.

When the cruise was over, it was a very simple disembarkation process in Los Angeles.  Since we had cleared customs when leaving Canada, we just got off the ship, claimed luggage and walked right outside.  Super easy and took us all of 15 minutes to get off the ship and outside waiting for our ride.

We had a second part of this trip, which was a 3 day stay at Disneyland.  Lots of new stuff going on at the parks and resorts, so be sure to read my separate review for Disneyland Halloween 2017.

To see pictures of the Coral Princess, be sure to visit my album here. https://flic.kr/s/aHsmkVicKR