Mariner of the Seas ~ Vargas-Crisosotomo Wedding

This review is going to be mostly about the ship.  Having cruised to the Mexican Riviera so many times before,  I will still touch on what we did in the ports, because we did have a few new experiences that are worth talking about.

We took our typical Jet Blue flights into Long Beach, but we flew down the evening before sailing because I needed to get on board the ship early- I was escorting a wedding group of 85 on this cruise.  We took a taxi to our hotel, The Doubletree San Pedro and stayed for one night.  The rooms at the Doubletree were quite large, very clean and suitable for the one night.  We had dinner with a friend who lives locally in the hotel’s restaurant and everything was very good.  We had a good night’s rest and then got up early for our shuttle to the ship the next day.

The Doubletree has shuttle service to the Cruise Ship Terminal which is only about 5-10 minutes away.  All in all a very smooth morning.

CHECK IN AT THE PIER:

We were processed with our paperwork pretty quickly, but still had about 45 minutes to wait until we could get on the ship, but once they opened the doors, we were on just around noon time.  I had my work to do:  attaching welcome aboard signs on 40 cabins, so my husband got situated with our carryon bags and a welcome  aboard cocktail while I ran around attaching these signs.   It took me about an hour and then I was ready for my welcome aboard cocktail.

The Mariner of the Seas, which is one of Royal Caribbean’s Cruise Ships is part of the Voyager Class.  I have been on the Voyager of the Seas many years ago, so I did know what to expect of this ship and I love Royal Caribbean.  The ship did not disappoint.    When you board the ship you are instantly deposited into the Royal Promenade which is an indoor “mall” that has shops, restaurants, lounges, etc.  It is one of the lively areas of the ship.  The Café is open 24 hours and you can get late night pizza, morning pastries and sandwiches during the day.  Coffee dispensers are available 24 hours a day and it’s nice to have this alternative vs. always going up to the Windjammer Café.

We had our days at sea, which were spent enjoying the warmth of the sunshine out by the pools or along the aft deck where it is quiet and blocked from the wind.

The group wanted to dine with late seating, so they did. However, I wanted to try the “Anytime Dining” concept, so with another couple, we dined most nights around 630pm, which was perfect for us.  We had great service and the dining experience seemed to move along at a very good pace.  Not too quickly and not too slowly either.  Always excellent food choices and great quality.   There were a few nights that we split up and dined alone.  We wanted to try out the Specialty Restaurant- Chops Grille, which is your traditional steakhouse and it was fabulous!  We thoroughly enjoyed our meal.   Then on one other night we dined with my friend from High School and her husband and daughter.  I wanted to thank them for the referral as this cruise group was for her cousin’s wedding.    That night we ate at Portofino’s- the Italian restaurant and it was again a very wonderful meal.  It was also nice to spend some quality time with a friend from High School, who I was never close to or all that friendly with in High School, but thanks to Facebook and all the reconnections made, new friends have been found.  It’s really great!

The Entertainment on board was great- between the stage show, the comedians, the ice show, the ventriloquist (he was really good) and then the guest participation shows- we really did have a good time.  I will also note that I won the “Don’t forget the lyrics” game show and my prize was a bunch of Royal Caribbean stuff- or as they say “more crap to pack”- but it was fun to participate and to win!  I also nailed several of the Name that Tune Trivia contests…I love music, I really do! 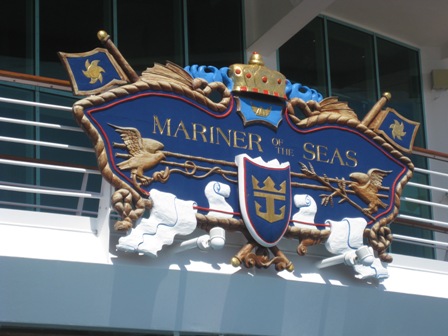 My prizes or "more crap to pack"- but I really did need new coffee mugs! 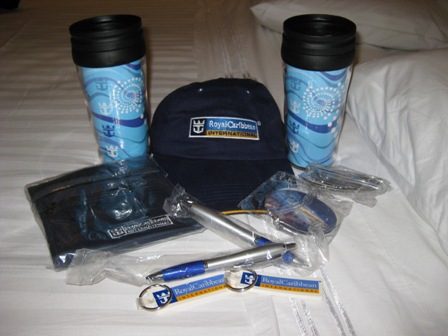 Our first port of call was Cabo San Lucas, we had my clients wedding to attend that day, so we were shuttled to the Casa Dorada Resort on Medano Beach and spent the day there.  It was blazing hot and a beautiful day for a wedding.  The wedding coordinator had everything set up perfectly and the entire day went wonderfully.  The reception/meal was also at the resort, al fresco next to the wedding site – which all overlooked the water, with the cruise ship in the background.  It was a beautiful day and a very blessed event. 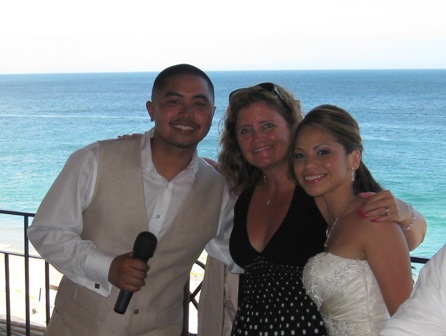 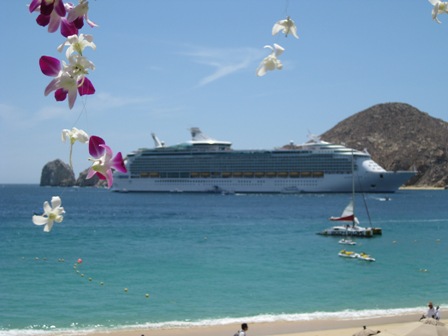 Mazatlan was our next port and we signed up for the Salsa & Salsa excursion, which was a wonderful time.  We were picked up at the ship and taken to a hotel along the beach.  The Dancing Chefs all welcomed us with Margaritas (yes at 9am) and then proceeded to tell us what the day had in store for us- we were going to make 7 different salsa and learn how to make authentic Margaritas and then we would learn to Salsa dance.  It was a great excursion and I would highly recommend this to anyone.  We then had the choice to shuttle back to the ship at our convenience in a pre-paid cab, so you could enjoy the beach/pool area as long as you wished.   Great excursion and they have just opened up in Cozumel and will be opening up a new location in Cabo San Lucas early 2011. 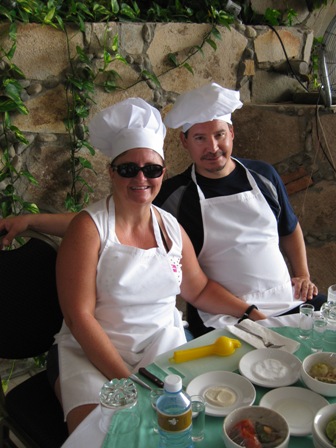 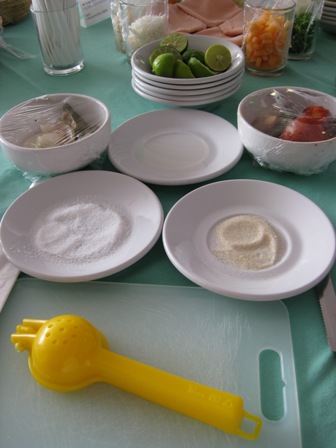 Puerto Vallarta  was our last port and we decided that we would try the Tequila Tasting tour…it was a good trip, we had an excellent tour guide with lots of knowledge and humor.  We first did a city tour of Puerto Vallarta and walked around the waterfront and eventually ended up at the Tequila Distillery about 20 minutes outside of town.  We tasted 5 different tequilas and then had an option to buy (of course).  There was a little restaurant on site, so most everyone on the tour got something to eat while there and they also had several arts/crafts tables set up with people selling their stuff.   First time I got chased down to buy something- I walked away because the price wasn’t right and he followed me into the bus with his final offer- now how was I going to refuse that? 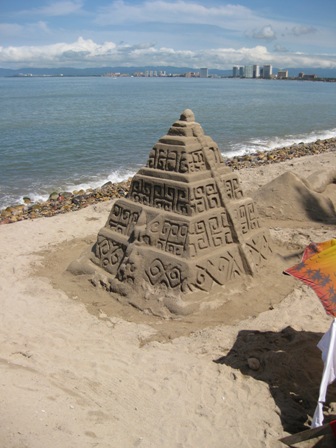 This was a great cruise, we had a fun group of people with us and it was wonderful to get to know the friends and families of the Bride & Groom.

It is a shame that as of this writing Royal Caribbean is pulling out of the Mexico market from Southern California, but I do understand.  They have had to put the prices so low just to fill up the ship and it’s not a good economic decision for them to keep doing that.  They will return at some point in the future, once bad things stop happening in Mexico!

I love Royal Caribbean as a cruise line experience and also as a business partner- the group department was wonderful to work with and that is important.  When I spoke to these clients and they were deciding between Royal Caribbean or Carnival for this cruise, I was quite honest with them and advised that Royal Caribbean would be the better choice for their age range of guests and that from a groups department, they would stand to gain much more.  It all worked out very well!

The dancing was not as great on this ship as we have had on others and that would really be my only complaint.  The dance floor in the disco was always sticky and the one lounge with the nice wood dance floor was once again- under-utilized.   They also had the Country Western party along the Royal Promenade and when I told the Cruise Director that I thought it was a horrible idea, he told me “don’t knock it until you’ve tried it” and I asked him if he Country danced and he walked away.  Hmmmm!

One of the wedding guests put together a great video, check it out:

To View additional Pictures of the Cruise Ship & Our Adventures in Mexico:

Pictures of Mariner of the Seas 2010